What is it about Costco that makes normally rational humans behave like beasts?

My best guess is that it’s CDS, Costco Delirium Syndrome, not to be confused with CVS, a pharmacy where customers usually mind their manners or CDC, the Center for Disease Control where doctors research and treat CDS.

CDS symptoms often present as perspiration, palpitations and rage and are immediately detectable when people enter the parking lot. A furor possesses the drivers, as though their dynasty will cease if they don’t beat you to the paper products. It’s astonishing to witness these women and men of all ages and walks of life behaving so badly. I thought I heard one mother yell, ‘Son, now! Get to the choppa,’ but in reality it was, ‘Hon, wow! What a good shopper’ when her 10-year-old wrested a trolley from an unsuspecting senior and commandeered it toward the entrance.

For you who aren’t in the know, not everyone has the right to shop at Costco. One must pay an annual membership fee before passing the gate keepers, those greeters who double as security people. I could devote an entire essay to the power they wield with just a nod of the head and a tally counter as their only weapons. But back to the matter at hand…the mania that envelops people once they walk through the door.

It could be from oxygen deprivation. Truth be told, I stopped breathing on my maiden visit. I had never seen so much merchandise under one sky lit ceiling. Aisle upon aisle of food, clothing, electronics and treats. Home goods, garden tools, you name it; it’s there and in large quantities. With an average Costco measuring roughly 144,000 square feet, navigating such a voluminous space can be exhausting. Shopping with a Sherpa or handheld GPS is helpful, but the real challenge arises from pushing the massive shopping carts. In truth, they should require a crane operator’s license or at the very least wield a sign that reads ‘Caution: Wide Load’. Those things are huge. I once witnessed a young dad place his two kids in the front of the caddy, then fill the back with a wide screen TV, a Waterpik, frozen pizza, a case of Kendall Jackson Chardonnay, a metal detector, women’s camisoles, a pile of books and what looked to be part a sectional sofa, as well.

Wait, I’m exaggerating; there were no books.

My husband is not a shopper. Given the choice of a trip to the mall or a visit to the dentist, he will choose a root canal any day of the week. There were times when I begged him to accompany me to a boutique. The excuses ranged from hilarious to high drama: feigned illnesses that might be contagious (‘I’m only thinking of others’) to business calls he forgot were on his calendar.

When I finally convinced him to join me on a Costco adventure, I regretted it within minutes of our arrival.

Watching my husband’s face as his eyes scanned the warehouse, I could see a smile form on his lips as he took it all in. And then, the signs of fever appeared on his brow…

“Look at this,” he exclaimed, grabbing a box of Cheerios.

“No, honey, we don’t need it,” I said, placing it back on the shelf. “Four bags of cereal in one box is wasteful. It will go bad before we can use it. Besides, the kids aren’t visiting ’til Christmas time.”

Next were taquitos. “How about these!”

“Sweetie, we don’t eat that stuff. It’s heart unfriendly and it would only stay in our freezer.”

“Yes,” he, rebutted, “but look at the price.” Back it went to the frozen food case.

When he espied a table of tube socks, he could barely conceal his glee. “Wow; a dozen pairs for $15. Where can you find a deal like this?”

I wriggled them from his grasp, explaining that his basketball career ended in college and that they would remain unworn in the dresser drawer. I asked him, “How is that a bargain?”

The final attempt was when he ran (and my husband does not run, not even at the risk of missing a flight from Dulles) toward a huge bag of ‘jerky’ like treats. “Baby, we’ve got to have these.”

“No, my love, we don’t,” sounding more like a mother of a 5-year-old than the wife of a sane adult. Trying a different approach, he reasoned, “but they look delicious and it says right here that they are lean and full of protein.”

“Um, darling,” I said, extricating them from his arms,” These are dog treats and we don’t have a dog.”

Unfazed, he sheepishly replied, “Not yet. But who cares; you can’t beat that price!”

For some couples, Costco is a bonding experience…for others, a source of major conflict. My parents nearly missed their 60th anniversary a few years ago. Mom threatened to divorce
my father if he would not agree to stop buying 10 pound bags Vidalia onions and Cara Cara oranges. The conversation went something like this: ‘Henri, who is going to eat all this? We are only two people. Please! Stop!’

Unfazed, Dad continued his weekly trek, and each trip supplied more bounty: Campari tomatoes to sustain southern Italy and the entire island of Malta. Toilet paper that could ring Sorority Row twice. Mom was livid. ‘Henri, ENOUGH’. Yet, Dad held firm. ‘But Alice; I must go. After all, we are members.’

‘Oh, Henri. It’s not the food and beverage minimum at The Everglades Club, for crying out loud.’ She has since given up the battle because in fact, shopping at Costco gives him great joy.

I suppose that my father, like others, is lured by The Samples. You may have heard that at various stations throughout the warehouse, hairnet clad elves stand poised, offering bite size tastes of decadence to passers-by. No matter how disciplined you are during the week, when you go to Costco, all bets are off. Maybe in the outside world you subsist on kelp smoothies and quinoa bowls, but within the warehouse walls you’re shamelessly lining up for seconds on deep fried mozzarella sticks, and every imaginable form of burrito, brie and bratwurst.

Some say it’s a cult, others call it madness, but Costco Delirium Syndrome is real and its victims deserve our compassion and help.

Thankfully, I recall seeing a treatment for CDS sold in a 10-pack on Aisle 7. Dashing over there now to pick some up.

Out of my way. 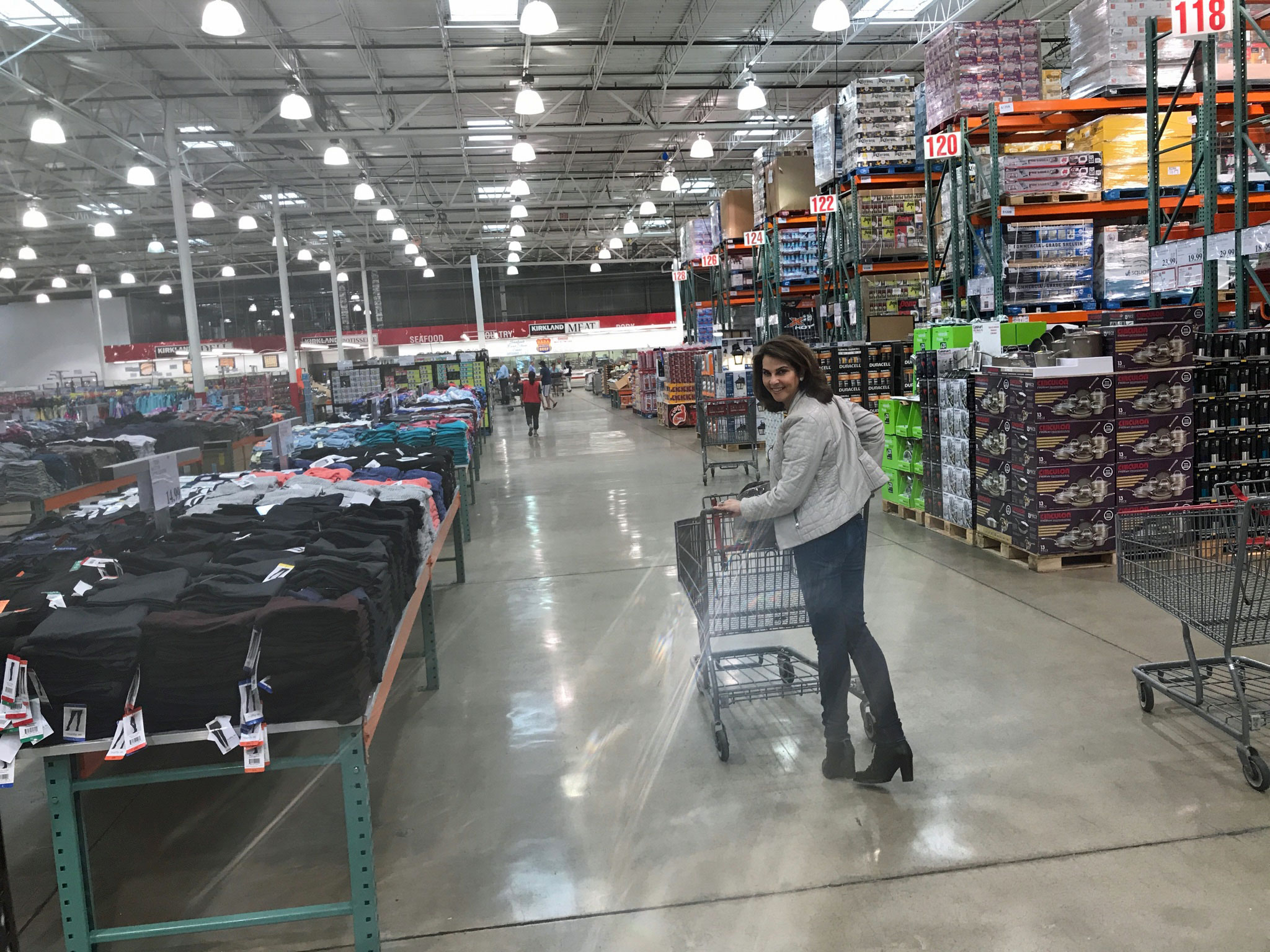