One would imagine that with a name like Mimi I would be destined to become an opera lover.

Not so. It took 57 years, six months and 4 days before I even attended my first performance.

I grew up listening to classical music. My father indoctrinated his daughters at a tender age into the ways of Mozart, Telemann and Bach. Every Sunday morning, the McIntosh stereo sent forth strains of concertos, sonatas and symphonies, but arias and canzonettas never made Daddy’s play list.

As a young adult, I shied away from the opera for personal reasons; I thought it would be depressing. It didn’t help that compete strangers gleefully shared the fact that Mimi was not only the name of their first poodle and favorite grandma, but the ill-fated heroine in ‘La Bohème’, as well.

Yes, I know, she died of consumption. But didn’t they all succumb to some terrible fate? Tuberculosis, stab wounds or suicide? Think about it; Carmen? Tristan and Isolde? Romeo and Juliet? Not what you’d call a happy-go-lucky bunch. No, I thought; if I’m paying to be entertained, then I want to exit the theater smiling.

As I got older, I opted to broaden my narrow view. The music was certainly compelling and I came to accept that the stories were, well, just stories. No need to take them personally. Unfortunately for me, I never seemed to find the right moment. For the ballet? Absolutely. Theatre? For sure. But opera? The timing never seemed right until this past spring.

A new friend of mine happened to be both an opera aficionado and patron. Unlike the blue-haired grandes dames of yester year, Anne is a modern ‘funster’ who hosts W*O*W* (Women, Opera and Wine) soirées in her home. As the WNO’s ‘Opera Ambassador’, her mission is to enlighten women so that they will flock to performances rather than shy away. Several gals I knew had attended her gatherings and raved about how enjoyable it made their whole experience.

After months of saying ‘no, thank you’, I had run out of excuses. It was time to support my friend; I was heading to the opera. 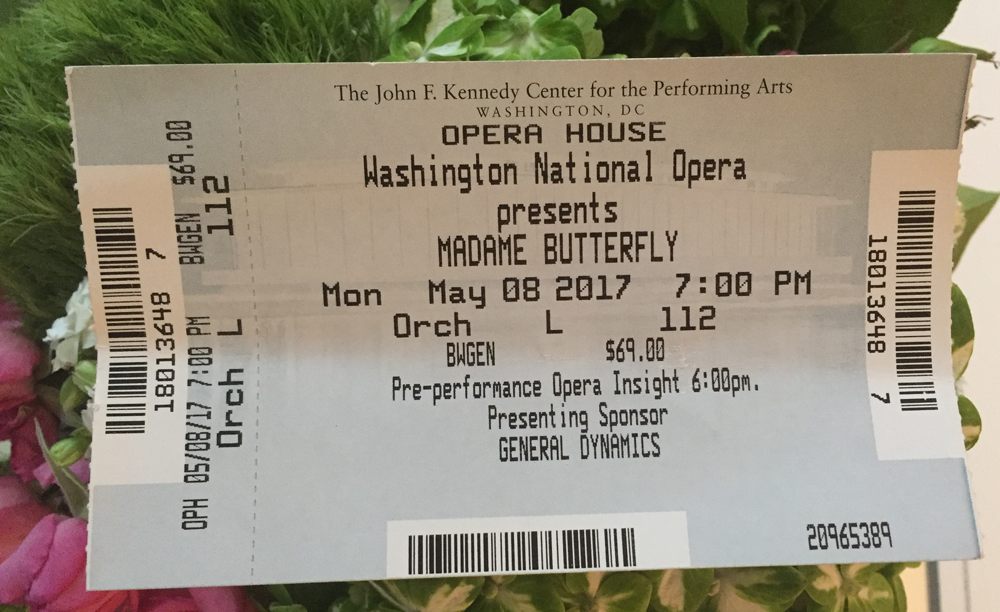 The Kennedy Center was splendid, as usual, on that warm May evening. The hall was filled with eager devotees, a handsome crowd who had waited patiently for ‘Madame Butterfly’, the final performance of the season. I had tried to dress the part in flowing silk evening pants and way too high heels, aspiring to but not quite reaching diva-like stature.

I walked through the impressive lobby, passing food concessions along my path. In a rush to get out the door and not be late for the show, I had forgotten to grab dinner. I was too excited to eat and went directly to claim my seat. Only a few rows from center stage, I was perfectly positioned for the excitement to come.

I was relieved to find my dear pal Wendy in the seat next to mine. How kind of our mutual friend to place us next to one another. It had been months since we last met, so there was much to catch up on.

As we were chatting, my other seat mate arrived. She wore a pill box hat and a scowl. Through squinty eyes she gave me the once over as though inspecting me for fleas. Begrudgingly she stated, “I like your pants”. I thanked her and Wendy chimed in, “I like your hat”. The connection was made, but she did not look the least bit happy about it.

At last, the lights dimmed and the curtain rose. The moment had arrived; Butterfly, Major Pinkerton and the rest of the cast began to sing their heart wrenching tale. Mesmerized by their presence, I ignored my growling stomach and hoped that those seated in adjacent rows did, as well. The performers’ voices enraptured me and by intermission, I was spent. Whether exhausted by hunger or compassion for poor Butterfly, I’m not quite sure. 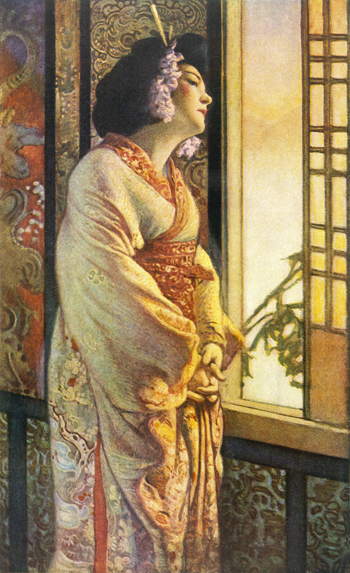 As the house lights came up, ‘Hat Lady’ (seated to my left) tapped the shoulder of a young woman seated directly in front of me.

“Excuse me”, she growled. ‘Hat Lady’ was clearly annoyed. “I think you should know that you were disturbing me during the performance”. The timid young woman and her companion exchanged bewildered glances. They had no idea what the woman was talking about.

“You were fanning yourself with your program, and the reflection bothered me terribly.” Once again, the girls were baffled and did not know how to respond.

At that point Wendy jumped in, attempting to diffuse the situation. “You didn’t bother me a bit”. But Hat Lady was having none of it.

“That’s because you couldn’t see the offending reflection from where you are seated.” No one knew quite what to say other than, ‘Oh-kayyyy.’

Wanting to escape this awkward scene, we hurried to join our hostess in the donors’ lounge. When we arrived, she handed us each a glass of champagne, wanting to ensure that our evening was as pleasant as could be. Her hope was that we would come to appreciate the art that she so passionately loved.

Little did she know that champagne was not the way to our hearts. It was food. We were ravenous.

Scanning the elegant room for a canapé-or a can of beans, I espied Hat Lady in the corner. There she sat, sipping bubbly with her date. All smiles and grace, she
looked nothing like that grouchy lady we left behind in Row L.

The bells announcing intermission’s end began to chime. What? No time for a snack? Witnessing the panic on my face, Wendy took action and pointed to the bar. “Hurry. Over there.” She led me to a table replete with bowls of Goldfish and M&M’s. Like two giant squirrels, we stuffed as many candies into our paper napkins as swiftly as we could.

Relief was on its way. We regained our seats and looked forward not so much to Butterfly’s fate, but rather to how soon we could fill our tummies.

The second act began with me thinking I was so clever, hiding bons bons in my left hand while stealthily maneuvering them toward my mouth with the right. The picture of discretion, or so it seemed. I chuckled silently at my good fortune.

And then, it happened. I was horrified to see that Hat Lady was bent in two. She had assumed the position one takes in preparation for a crash landing. Had the poor woman suffered a stroke? Was she overcome by emotion? Panicked, I leaned down to offer my assistance.

“Are you alright, madame,” I queried. Still doubled over, she sharply angled her head toward me, daggers shooting from her eyes. “Oh, I’m fine, ” she hissed. “I’m just enjoying watching your hand move back and forth to your mouth more than I’m enjoying the opera”.

I froze. I could not reply. Utterly humiliated, I sat bolt upright and looked straight ahead for the next 45 minutes, clutching my treats until the curtain fell. (For those of you who might remember the ad, you should know that they lied. M&M’s do melt in your hand.)

I was mortified, ashamed that I had just been reprimanded.

When the performance ended, Hat Lady jumped to her feet and screamed Brava! Brava! Braaaaaavaaaa at the top of her lungs in a most dramatic display.

While the performers made their bows, I whispered to Wendy, ”I’ve been scolded,” and explained what had transpired. She immediately defended me as only a friend would.

“Something is obviously wrong with that woman. She must have issues.”

“Perhaps, but I need to offer her an apology,” I said.

As Hat Lady filed out of our row, I caught up with her and touched her on the shoulder.

She spun around and was stunned to see me.

“I’m very sorry that I disturbed you,” I offered. She was shocked that I came offering contrition.

“Well. Um. I. Uh. I just felt that I had to say something, ” she stammered. My apology had thoroughly disarmed her. Perhaps her intent had been strictly to wound, not correct. My mea culpa seemed to have reduced the satisfaction she derived from her sting.

I walked away feeling mildly better, still cringing, but certain that I had done the right thing.

When I tell this story to friends, they all hoot, holler, and then they become indignant.

How dare she embarrass you like that? Who did she think she was? I listen and laugh, mostly at myself.

I apologized, yes, but trust me, I’m no saint. In one of my less ‘finer moments’, I could be heard muttering under my breath, “Who wears a hat to the opera, anyway?”