Every Friday morning, our newspaper publishes ‘Weekend,’ an insert filled with activities ranging from concerts to art exhibits to food festivals.  Each week, I would diligently peruse the pages and think, oh yes, that looks interesting; I should definitely take part in (fill in the blank), while silently congratulating myself for being so adventurous.

And then, right on schedule, I’d proceed to talk myself out of attending the competitive Karaoke tournament or the History Museum’s retrospective on mullets.

What if it rains? What if this Saturday Jupiter finally aligns with Mars and I’m not around to watch?

In the end, like always, I’d stay home, soothing my abashed soul while promising to join the fun next weekend. 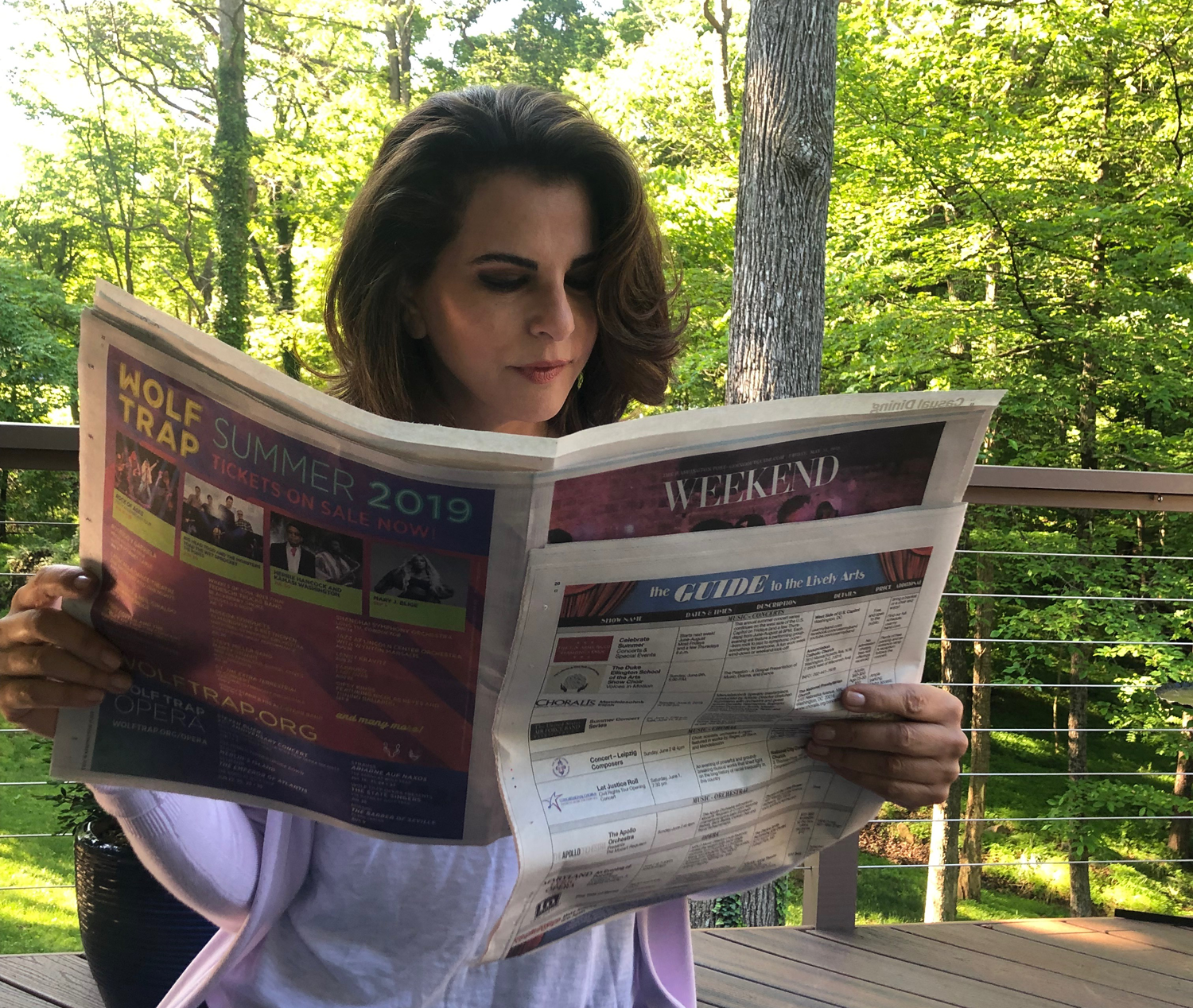 The following Friday, the cycle would recommence and leave me feeling both furious and frustrated. After several months of suspecting the worst, it was finally confirmed that I suffered from WSS: Weekend Section Syndrome.

Unfortunately,WSS was merely a manifestation of a bigger concern:

Where was my get up and go? Had it gotten up and left?

With a big birthday just months away, I knew it was time to change and start saying ‘yes’ to what was usually an immediate ‘maybe’ (code for ‘not on your life’).

One gets philosophical with impending ‘zero birthdays.’ Not to sound morbid, but do I really want my obituary to read:

Keeping that in mind, I recently took the bold step of attending a weekend at Kripalu in western Massachusetts. Stop laughing, friends.

Yes, of course I knew that Kripalu was primarily a yoga retreat. Perhaps you’re familiar with my motto: Loathe yoga, Love yogurt?  But my intention was to participate in a workshop on goal setting and living a life without regrets. Yoga was simply optional, and you know who opted out.

I had learned about the two-day program from Caroline Miller, the life coach and author of several self-help books including her latest, ‘Getting Grit.’  Grit, in this case, can be best described as sticktoitiveness- the very thing I lacked. Caroline was leading the class, which was what I needed to cure my woeful disorder and place me back on the active list.

The big six-oh was looming, and each day was a reminder that ‘Tempest Fugit’, which I believe is Latin for ‘move it, sister’.

How on earth can I go? What if my closet needs straightening that weekend? Or my teeth need bleaching? And just like that, the imaginary boulders began to clutter my path.

No, no, no. Not this time. Armed with my desire to change, God help me, I headed to the Berkshires.

In spite of the gray clouds and relentless drizzle, the surroundings were beautiful. Lush grounds, healthy food, and pure air; what an ideal setting for taking in new ideas.

Our group consisted of 19 women from different decades, backgrounds and beliefs. Together, we examined our strengths and learned how to apply them toward living a full and purposeful life.  On the last morning there, the sky finally cleared, both figuratively and literally.

My heart opened, as well. Saying yes to this experience, and more importantly following through with it, strengthened me in unimaginable ways.

I returned home feeling buoyed and inspired to take on new challenges.

That same spirit of enthusiasm prompted me to participate in a Poetry Open Mic Night at a local bookstore.  At the time, it seemed like a good opportunity for sharing my writing with others. My daughter Chessy encouraged me, suggesting we make an evening of it and celebrate afterward at a nearby bistro.

Then, true to form, I began convincing myself that maybe it wasn’t such a good idea after all.

What if I get laryngitis? What if the sky falls or the sidewalk crumbles?

When I picked up my daughter from the metro station, I nervously suggested that we skip the poetry reading and head straight to dinner, instead.  She was having none of it.

We arrived at Bard’s Alley with Chessy acting like my manager while I tried to hide behind a bookcase.

The moderator welcomed everyone and invited folks to read either an original work or a poem by their favorite author. I had planned to recite my ‘Ode to Coffee’ but seriously considered switching to ‘Humpty Dumpty’, instead. Somehow, delivering a childhood ditty seemed much less threatening than sharing something as personal as my own words.  But before I could remember if Humpty Dumpty first sat on a wall or had his big fall, I felt an elbow poking my side.

‘You’re up,’ Chessy whispered, nudging me toward the lectern.

No looking back, the time had come to confront the microphone and my fears.

Quietly, I began to read.  ‘Like love, the first sip is heady and hot…’ Tentative at first, my voice grew stronger as I became more sure of myself, enunciating and emoting, until the end when I stood beaming at the sound of applause.

My daughter whooped and whistled as I stepped away from the mic.  She had filmed the presentation on her phone, and asked if she could post it on line.

Before you conclude that I’m some poetic hero, I need to come clean.

That audience was not a rough crowd. The gathering was composed of a gaggle of 8th grade girls reading from their composition books, (‘If I were a tree, I’d be an elm….’), their helicopter moms (‘Speak up, Morgan, so everyone can hear you), two tipsy girls night outers (‘I thought you said there’d be wine’), one goth getting something out of her system (‘Death. Darkness. Doom. The End.’), and a poet in earnest, sporting black braids, Birkenstocks and a tee shirt that read ‘Robert’ on the front and ‘Frost’ on the back.

In all, we totaled no more than 14 people, and that’s only if you included a wandering customer seeking the latest James Patterson novel.

While it wasn’t exactly opening night at the Kennedy Center, it was a joyful debut. So what if it was my daughter who clapped the loudest. I accomplished something important by stepping toward my goals rather than shying away.

Mark Twain said “Twenty years from now you will be more disappointed by the things that you didn’t do than by the ones you did do.

And twenty years from now, one can hope, Weekend Section Syndrome will be a disorder relegated to the past.

It’s already in mine.