House hunting in Washington DC is neither for the feint of heart nor the weak of wallet.

When I moved to DC four years ago to marry my husband, we settled into The Kennedy Warren, an historic Art Deco building located in the heart of Woodley Park. Its residents ranged from former diplomats and cabinet members to yuppies on a mission.

The ‘KW’ borders the National Zoo, and one of the perks of living there was waking up at 7 each morning to the sound of happy, braying zebras.  I know several Washingtonians who insist their neighbors are whining asses, but this was different; we had the real deal right outside our window.

What we didn’t have were kind neighbors.

I had lived in big cities before so I was not shocked by a less than amiable attitude. As a younger woman, I thought I would die of frostbite from the Parisians’ lack of warmth, but trust me, DC dwellers are in a polar league of their own.

What a bunch of grouches!

My hubby and I made a point to habitually greet people with a cheery ‘hello’ only to be met with…nothing.

There was one woman in our building, Ms. Prissy Bun Head, (not her real name) who either feigned deafness, was half Martian, or simply allergic to people.  Each time I would salute her with a warm smile and a loud, ‘Good morning’, she would look right through me without uttering a word.

‘What’s wrong with these people,’ I asked my husband. How can you not say hello when you are face to face with someone and one of those faces is smiling?

We would often stroll the neighborhood, admiring the homes and gardens, happy to be in our nation’s capital.  Guess we were the only ones. ‘Hello’. Nothing. ‘Good morning’. Nada. ‘Good evening’. Zip.

Get me out of here. It was time to exit the ‘hood. We began our search for the perfect home in the District, but after several failed attempts, we came to the conclusion that for what Mimi wanted, we would have to rob several banks, and sell at least two if not three of our adult children.

To make matters worse, the neighborhoods I was drawn to had a limited inventory of houses for sale. Homes would appear on the market and be snatched up faster than you could say Jumping Jefferson Memorial. Pocket listings, those little gems that the realtor whispers about in your ear were no better; on one day, gone the next.

It was my turn to be grouchy.  After two years of endless open houses and repeated disappointments, we took a conscious break from house hunting. No more MLS madness, no more open houses with the masses.  Bloom where you are planted, I told myself, even if you are surrounded by prickly weeds.

I tried to get into the DC scene, joining a charity board here, volunteering at a hospital there, but without a ‘real’ home of our own, I continued to feel in limbo. I longed to be ensconced in a neighborhood and feel part of a community.

Well meaning friends introduced me to their circles, but the conversation seemed to sputter when I couldn’t claim my own turf. Although DC is truly a city of transients, the lifers stake out what is theirs by drawing an invisible line that an apartment dweller needn’t attempt to trespass.

I remember one soiree where my kind hostess presented me to a one of those native ladies. By way of an introduction, she graciously offered, ‘Mimi’s new to DC and is longing to join a book group’.  The woman studied me carefully. Through squinted eyes, she peered down her nose at me (even though I was 5 inches taller than she) and declared with a locked jaw, ‘One would have to die before there’s an opening in our book group.’

At that point I didn’t know if I should offer her arsenic or sip some, myself.

Some months after that, my hubby and I went for a post church, post pancakes Sunday drive.

He humored me as I whined that at our age, most of our friends were considering where to retire rather than where to find their primary home.  Come on, he said, let’s ride out to Virginia.

As we exited Washington that day, I realize now that I never really looked back. Eyeing the lush scenery, my mood began to lift and for the first time I wondered, who says we have to live in DC?

We happened upon a rambler set back from the road, overlooking the woods. It wasn’t at all how I imagined my dream house. Miles of style away from the stately abodes of Wesley Heights and Kalorama, this was more or less a rectangular box, a mid-century structure complete with a car port in front and overgrown landscaping all around.

But the setting as a whole was beautiful. Mature elm trees adorned the property, which was perched above sprawling woods below. There were squirrels and chipmunks and deer, oh, my! 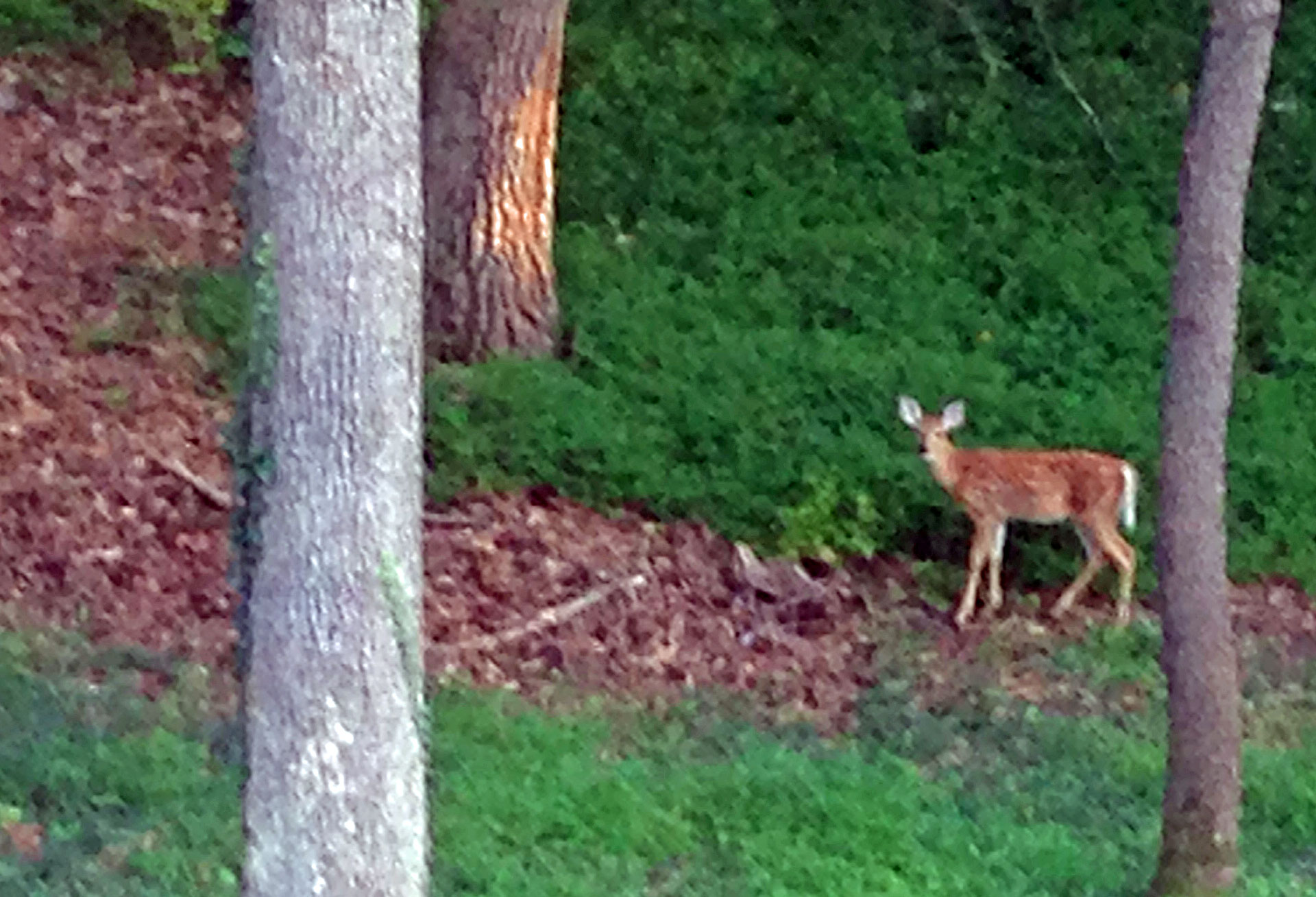 Lo and behold, a for sale sign. Better yet, ‘Open House this Sunday’.

We made an offer on Tuesday, it was ours by Thursday and the rest, as they say, is love.

Our city friends and acquaintances thought we had lost our minds. In fact, our saintly realtor even asked Rick if I had undergone a lobotomy.  But you can’t beat the life out here, where neighbors wave and stop to say hello, and the grocery store cashier actually smiles as he loads your bags.

DC pals tried to reason with us;

It’s so far from everything. (We both know how to drive.)
You’ll practically need a passport. (Don’t worry; we’ll get vaccinations, too.)
You’ll never move back to Washington. (How right you are.)

Now, it’s a treat to meet friends for dinner in the city. For some reason, the monuments seem more majestic now, the sights more alluring. But as soon as we’ve caught up with communing and culture, we can’t wait to get back to our little haven in the woods.

Last week, while moseying back home from one of those visits, a driver impatiently cut us off and flashed us a nasty look before speeding off.  We both burst out laughing and concluded, knowingly, that the poor fellow couldn’t help himself.

He must be from DC.